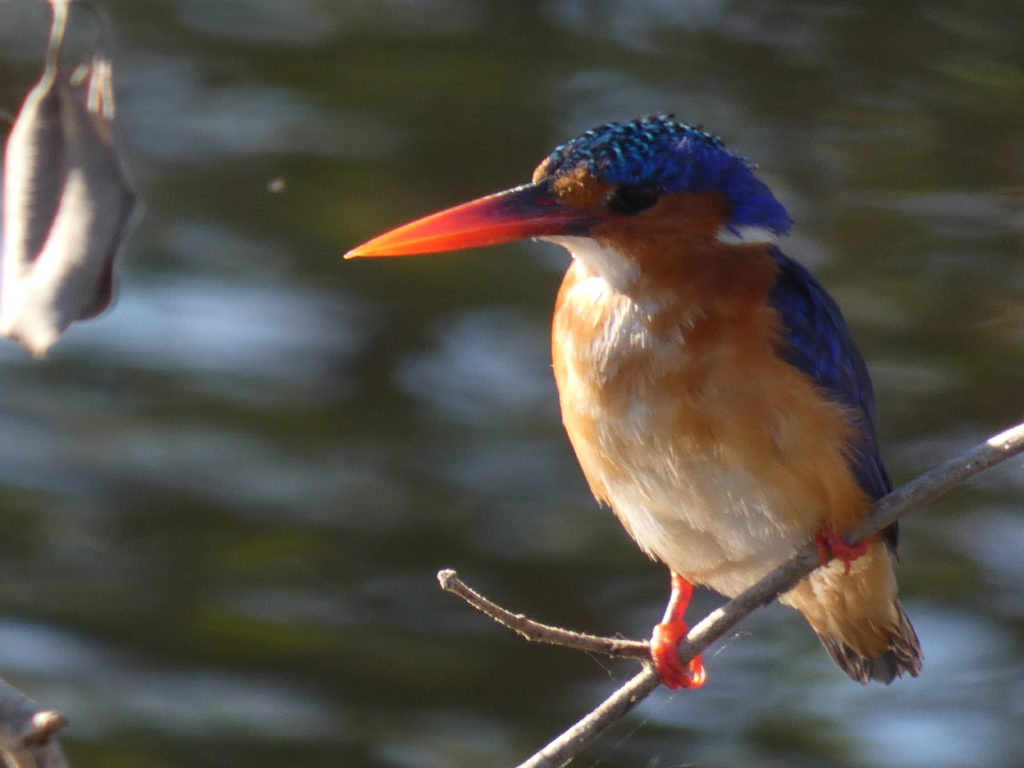 George Boscoe raises exotic parrots. Some of you may have met “Venus,” a talkative female blue-fronted Amazon parrot, who has accompanied him more than once to artist receptions in the Gallery. George’s most recent bird expedition took him to the Tambopata Macaw Project in the southern Amazon basin in the Peruvian region of Madre del Dios.

Maggie Boscoe’s theme for her bird photographs is ‘The Beauty of Birds.’ Perhaps the word exotic could be inserted as her photos are either from Costa Rica, Africa or the Galapagos Islands. Maggie’s interest in photographing birds began on a family trip to Costa Rica. Next she brought her birding camera to Africa where she photographed exotic birds only to be found in that far-away locale. The cliché, ‘birds of a feather stick together,’ certainly applies to the Boscoe family of Orinda. Each family member is showing bird photographs of widely different species. All use a Panasonic Lumix DC-FZ80 which they describe as a good all-around birding camera as it has a decent zoom but is still light enough to carry. Maggie Boscoe is the curator of the Art Gallery at Orinda Library.

Sara Boscoe Bain’s birding interest was sparked by a family birding trip to Costa Rica. Upon returning home to Los Angeles, she began using her Panasonic Lumix on birding trips while home schooling her two children. Sara and her children discovered together that L.A. County is a birders paradise because of the diversity of species matched by varied topography. Their neighborhood has birding hot spots within a mile or two, there are desert locations and mountains to explore. She has plans to learn more about pelagic birds – birds who live in the open sea. View her virtual video exhibit HERE.

Lance Jackson of Orinda has been drawing and painting since childhood. He trained as a painter/designer at Washington University and Rhode Island School of Design. “My father used to draw caricatures which we all found enjoyable; I continue with it since it is a skill requiring practice. Something akin to playing music; it is habit forming as well,” said Jackson. A freelance artist and illustrator, he is also an adjunct professor at both UC Berkeley Extension and City College of San Francisco. By all accounts Jackson is known for pushing the limits where technology and unbridled creativity meet. His focus for this virtual exhibit is current Orinda details such as flowers from Safeway, fast food examples, two landscapes and the Orinda Theatre. “I like to think that my work remains fresh depicting recognizable places and current events. Of course I could be wrong. ‘Everything has been done before and yet everything is new.’” Jackson also wants people to know he is interested in drawing and painting portraits. “Drawing is my way of communicating,” he said, “the image is a possible form of dialogue, the beginning of a conversation.” Learn more about his work at www.lancejackson.net.

Jacqueline Proulx of Walnut Creek grew up in Quebec and has been in love with ceramics since she was 16. At that time she enjoyed visiting ceramic studios and artists, craving this kind of life, dreaming of being able some day to throw those magnificent objects on the wheel. At about age 50, when she was close to retirement, she had her own studio in Montreal. When her two grandchildren were born she moved to Walnut Creek to be near them and her daughter. She keeps her work alive by taking classes and experimenting in different studios exploring things like soda firing and hand-building huge 24” and 30” vases, bowls and vessels. She often works in high-fire porcelain in small, elegant things but also makes sturdy stoneware in earthy tones with bright colors. Porcelain’s primary qualities are translucency and whiteness. Proulx’s intention in creating ceramics is to make people feel good about everyday objects in such a way that some kind of beauty comes through in her work. View her video which gives you an idea of what these look like, https://youtu.be/5zL-U6eYH80. For more of her work go to www.clayandfire.org.