Note: Click on the boxes below to learn more about each event. 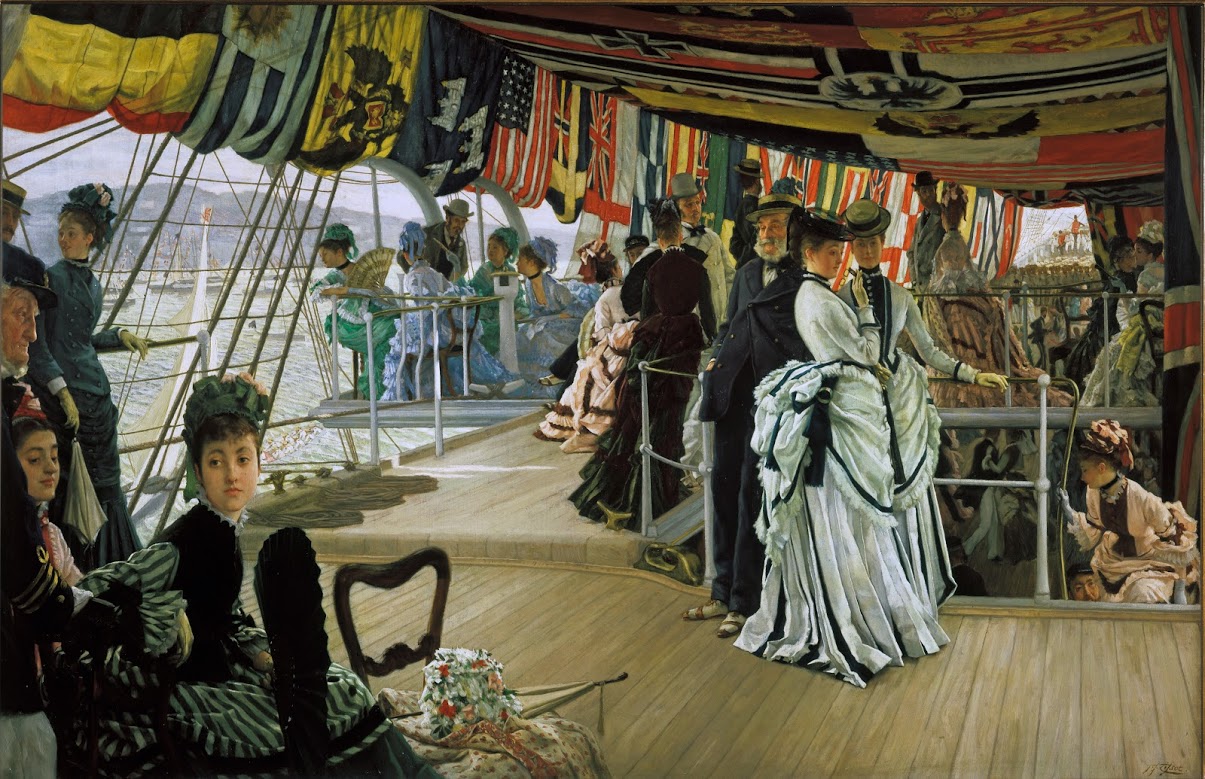 Jacques Joseph Tissot (1836 - 1902) was a French painter and illustrator, especially of Parisian, society before moving to London in 1871. This first major reassessment of Tissot's career offers

Jacques Joseph Tissot (1836 – 1902) was a French painter and illustrator, especially of Parisian, society before moving to London in 1871. This first major reassessment of Tissot’s career offers West Coast audiences a glimpse at the fascinating life and dazzling art of a man who captured an era. Research for the show included a visit to Château de Buillon, his former family home where part of his studio remains.

The paintings  you will see are sized 6′ to 15′ – quite large. Like many of his contemporaries he was influenced by Japanese prints but he also experimented with print versions of his painted works and studied the new technology of his time – photography. The unusual angles and framing he favored captured people’s attention.

In 1885 a major exhibition of his work took pace at the Galerie Sedelmeyer where he showed 15 large paintings in a series entitled La Femme à Paris. It was wildly successful; his compositions were unusual and inspired future cinematographers. The French women are shown in professional and social scenes painted in unexpected angles and framing influenced by Japanese prints. You can see these paintings in the exhibit; they are between 6 feet and 15 feet.

After the death of his muse Kathleen Newton in 1882, he became interested in Spiritualism. A newspaper report covering the 1964 sale of Tissot’s possessions described a collection of five thousand books including publications demonstrating that Tissot: ‘

“Had a weakness for ectoplasms, turntables, esotericism and spiritualism …”

There is so much more to Tissot – his last years were spent making paintings about Biblical events. Tissot’s paintings of the Ark of the Covenant were the basis for the actual Ark prop and Ralph McQuarrie’s illustration, made to resemble an etching, seen in Indy’s Bible in Raiders of the Lost Ark.

The Legion of Honor is open Tuesday through Sunday. Every Saturday the Legion of Honor offers free general admission to all residents of the nine Bay Area counties. Saturdays feature engaging art experiences for the entire family, including art making, gallery guides and tours with discussion and sketching in the permanent galleries.

General admission is free the first Tuesday of every month and applies only to the permanent galleries. Full-price admission to special exhibitions still applies. Redeem free admission by visiting the Ticketing and Membership Desks.

Discovery & Go offers free general admission for California library cardholders. This offer applies only to the permanent collection galleries. Full-price admission to special exhibitions still applies. Register at https://sfpl.discoverandgo.net/  to receive a dated Discover and Go voucher prior to visiting. 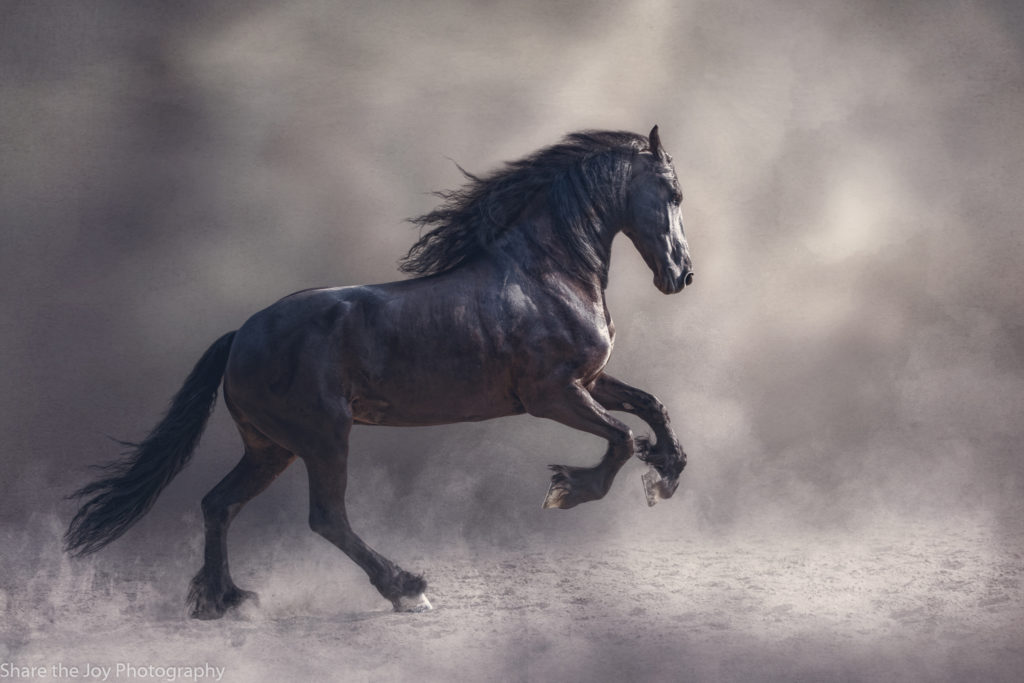 Art Gallery at Wilder presents the solo exhibition of "The Allure of Equine Beauty" by Barbara Brady-Smith of Lafayette . Brady-Smith agrees with John Galsworthy who says, "I am still

Art Gallery at Wilder presents the solo exhibition of “The Allure of Equine Beauty” by Barbara Brady-Smith of Lafayette . Brady-Smith agrees with John Galsworthy who says, “I am still under the impression that there is nothing alive quite so beautiful as a horse.” Viewers will ultimately agree with this statement when they examine her collection of photographs depicting steeds of all kinds at the Art Gallery at Wilder from February 1 -29, 2020. Capturing a horse in motion is no mean feat. Brady-Smith, a well known equine and pet photographer, embraces this challenge as seen in her breathtaking work. 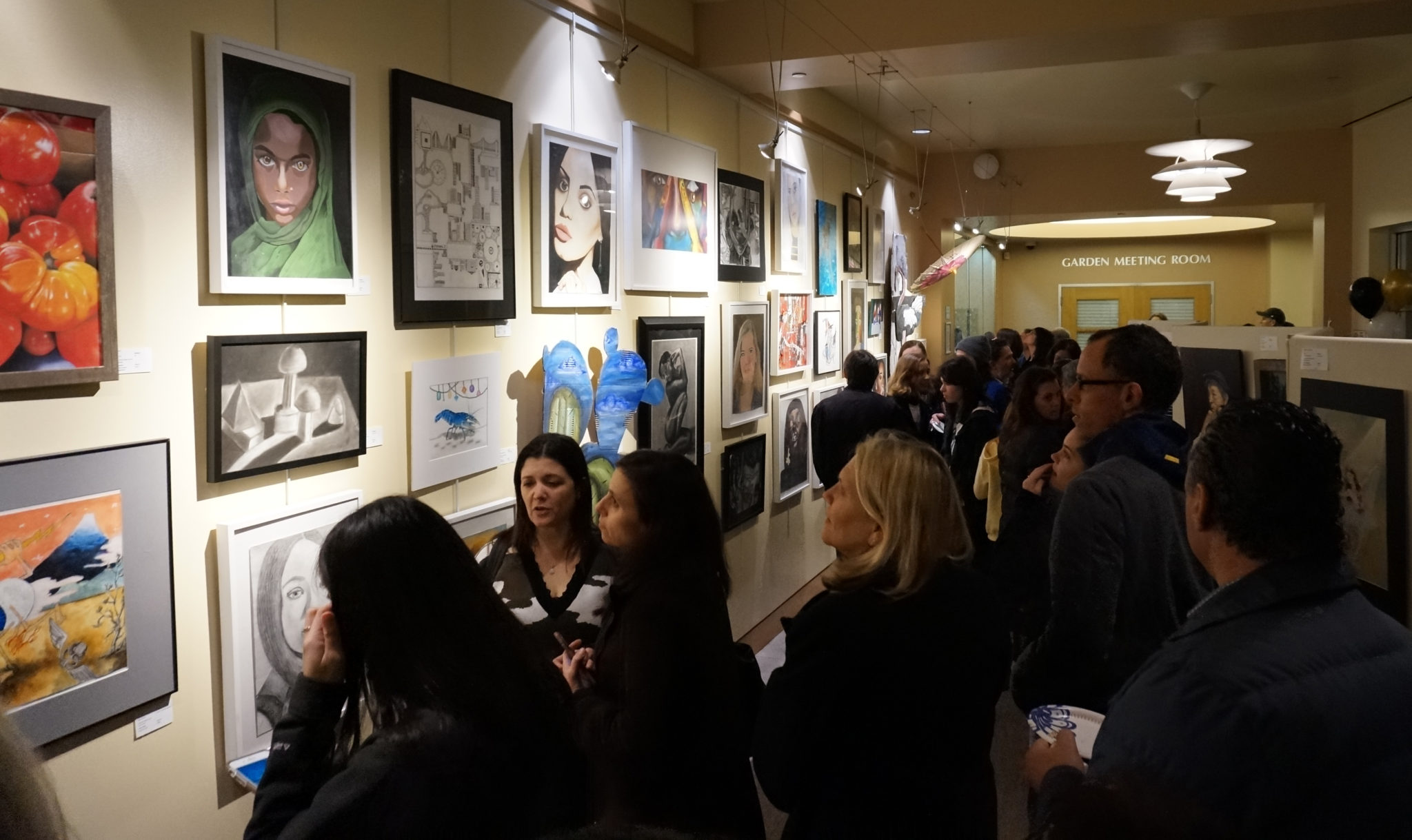 The Artists and Awards reception will be held on Wednesday, February 11th from 7-8:30pm at the Art Gallery at the Orinda Library. This is a free event, open to the

The Artists and Awards reception will be held on Wednesday, February 11th from 7-8:30pm at the Art Gallery at the Orinda Library. This is a free event, open to the public. Please join us to celebrate our young artists!

The annual High School Visual Arts Competition (VAC) showcases and acknowledges 2D, 3D, and Photography, and our newest category – the Lamorinda Artist Alliance Digital Art category. All work is by high school students who live in or attend school in Orinda, Lafayette, or Moraga, including all schools in the Acalanes Union High School District. The competition features cash awards, merit citations and a public exhibit of entries at the Art Gallery at the Orinda Library.

Entries accepted for the 2020 High School Student Visual Arts Competition will be on display for public viewing from February 4th through February 27th at the Art Gallery at the Orinda Library, 24 Orinda Way. Gallery hours are Mon to Thu, 10am-8pm; Fri and Sat, 10am-6pm; and Sun 1-5pm.

Art Gallery at the Orinda Library 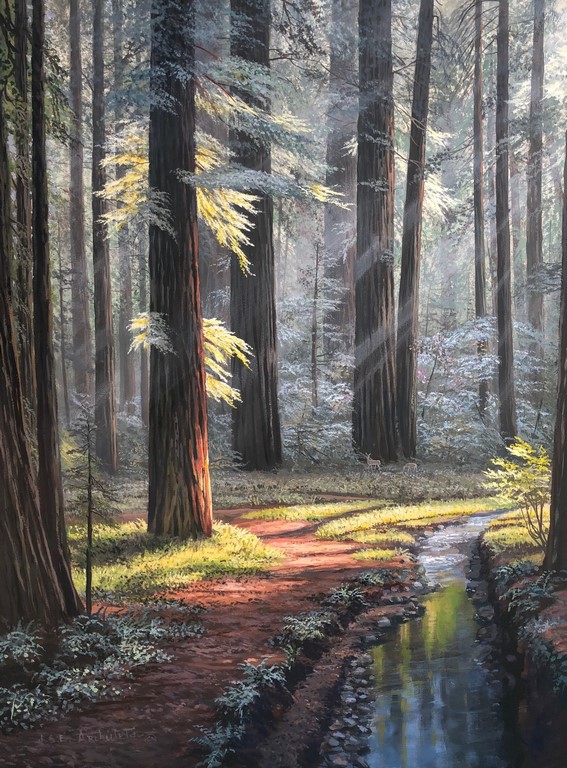 Join us for our February 2020 meeting with Acrylic painter

JUAN ARCHULETA started painting at a very early age on the family farm in rural Louisiana. While still a teenager, he earned spending money by drawing portraits of people he met while on a long train ride.  He had found his calling.

Although portraits are where the artist’s career began, in the early 1970’s, he decided to paint only landscapes, in particular forest scenes. This transition began as a personal journey to live the qualities he was endeavoring to portray through his paintings. For example, in his forest scenes, Juan began to use small deer to show the contrast of a fragile and transient life as compared to the large and virtually ageless trees.

His work is informed this way, “Times of solitude, relaxing with nature, the smells of the earth the feel of air on your skin, light and shadow and sounds of the elements around us.”

Juan describes his painting technique in this way, “Some paintings are thin and wash-like, resembling a watercolor method; others have a more dense layering of paint. In some, I have chosen to use a more impressionistic approach, while in others I have used more refinement in detailing.”

Juan will demonstrate the importance of painting light and shadow among the trees in acrylic. 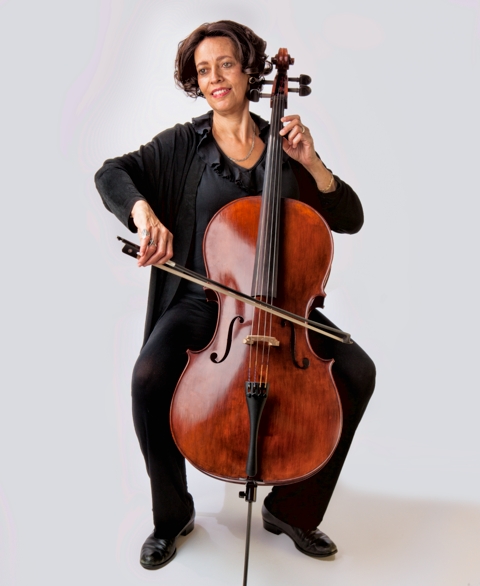 Beloved Cellist and Music Educator Dawn Foster-Dodson is remembered by many.  Raised in Lafayette, CA, Dawn was a beautiful, talented and heart-felt performer.  Her love for music was contagious.  She

Beloved Cellist and Music Educator Dawn Foster-Dodson is remembered by many.  Raised in Lafayette, CA, Dawn was a beautiful, talented and heart-felt performer.  Her love for music was contagious.  She owned, operated, and taught at the Lafayette Cello Academy and at Saint Mary’s College for decades.

This Tribute Concert was scheduled to be performed on Valentine’s Day 2016 with her SMC colleague Sharon, but due to her illness, it was canceled. The same music program she had envisioned will now be performed on Valentine’s Day 2020 by her dear friends.  Works by Debussy, Franck, Casals, and John Williams.  Featuring SF Opera Cellist Emil Miland and Performing Arts Faculty Pianist Sharon Lee Kim.

A member of the San Francisco Opera Orchestra since 1988, cellist Emil Miland is an acclaimed soloist, chamber and orchestral musician. He made his solo debut with the San Francisco Symphony at age 16, the same year he was selected to perform in the Rostropovich Master Classes at University of California, Berkeley. A graduate of the New England Conservatory of Music, he has received grants from the National Endowment for the Arts and Chamber Music America.

His many recital collaborations include performances with Jamie Barton, Joyce DiDonato, Susan Graham, Marilyn Horne, Frederica von Stade, the late Zheng Cao and the late Lorraine Hunt-Lieberson. In 2010, Mr. Miland was invited by von Stade to perform with her at Carnegie Hall for her farewell recital. Many composers have written and dedicated new works for him including Ernst Bacon, David Carlson, David Conte, Shinji Eshima, John Grimmett, Lou Harrison, Jake Heggie, Richard Hervig, Andrew Imbrie, James Meredith and Dwight Okamura. His recordings include David Carlson’s Cello Concerto No. 1 with the Utah Symphony on New World Records and his Sonata for Cello and Piano with pianist, David Korevaar on MSR Records. He is featured on many of Jake Heggie’s recordings beginning with the RCA Red Seal CD, “The Faces of Love: The Songs of Jake Heggie” and most recently, the 2013 release, “Here/After: Songs of Lost Voices” on Pentatone.  Mr. Miland is featured on David Conte’s CD of chamber music for Albany Records, on which he performs Conte’s Sonata for Violoncello and Piano (written for Mr. Miland) with Miles Graber, as well as Conte’s Piano Trio with violinist Kay Stern and pianist Keisuke Nakagoshi. This recording has been met with critical acclaim, with reviews praising Mr. Miland’s “impeccable playing in terms of both technique and taste” and lauding him for “extracting every ounce of passion from this passionate work”. Most recently, he can be heard on the Arsis recording, ”Everyone Sang … vocal music of David Conte”, collaborating with tenor, Brian Thorsett and pianist, John Churchwell. In July of 2018, he premiered Conte’s new Concerto for Cello with Michael Morgan conducting the Bear Valley Music Festival Orchestra.

Mr. Miland is presented in ”The Heart of a Bell”, a film by Eric Theirmann and Aleksandra Wolska, performing Smirti, a haunting elegy for cello, Tibetan chimes and bells with the Sonos Handbell Ensemble. He also joined Sonos in December 2012 as a soloist on their nine city tour of Japan. He also appears in the 2012 documentary, “Lou Harrison: A World of Music” by Eva Soltes. In 2013, he made his Paris recital debut under the auspices of the European American Musical Alliance. Last year, Mr. Miland toured to Hawaii and Australia performing chamber music. He is also featured on Love Life, a 2016 recording featuring soprano, Ann Moss and music by Jake Heggie, Liam Wade and Joni Mitchell. Mr. Miland plays regularly as a member of the Joshua Trio with Ms. Moss and harpist, Meredith Clark. He performs on a cello made in 1718 by Giovanni Grancino in Milan, Italy.

In January of 2020 Miland took part in the Violins of Hope project performing the premiere of  Jake Heggie and Gene Scheer’s INTONATIONS: Songs from the Violins of Hope for Mezzo-Soprano, Solo violin, Child Solo Violin and String Quartet. The instruments used will be ones that survived the death camps of the Holocaust. They have been restored and are sounding throughout the world and include a Cello of Hope. 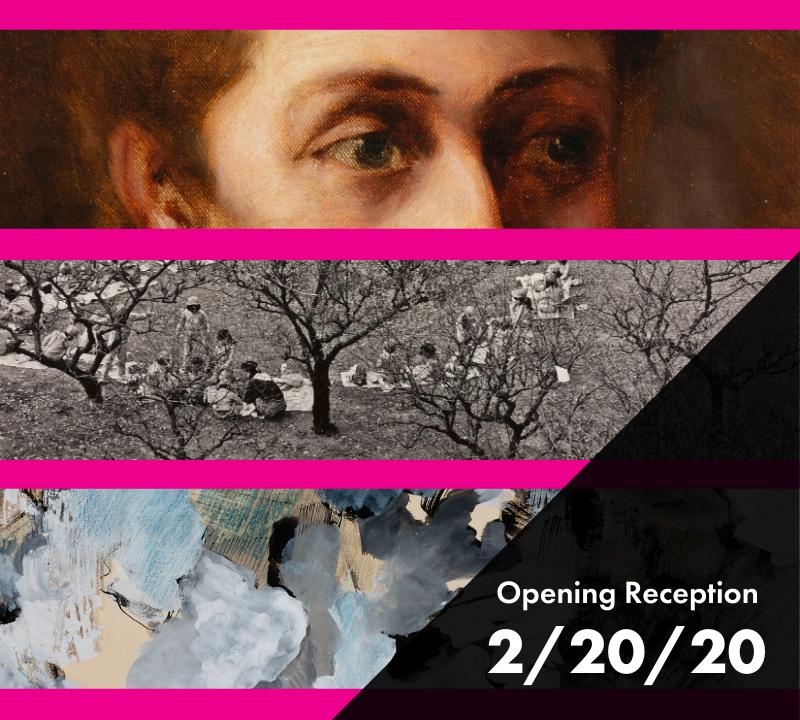 Join Saint Mary's College Museum of Art for an evening celebration of the opening of Spring exhibitions! Enjoy refreshments & music while viewing artwork featured in these two exhibits: Feminizing Permanence

Join Saint Mary’s College Museum of Art for an evening celebration of the opening of Spring exhibitions!

Featuring forty historical and contemporary artworks by forty women artists from the permanent collection, the recontextualized artworks explore a wide range of themes while collectively speaking to the underrepresentation of women artists in the permanent collections of museums across the country. The exhibition recognizes the contributions of women in the arts and their shared journey toward parity. This exhibition is a collaboration with SMC, Department of Art professor, Dr. Hossein Khosrowjah, and the students of the Issues in Modern Art course

Hiding in plain sight, the American political poster attempts to catch our eye and capture our vote through the use of visual language. Spanning the life of these ubiquitous messengers, this survey exhibition explores a variety of styles, design trends, and printing technology.  A program of ExhibitsUSA, a national division of Mid-America Alliance and the National Endowment for the Art 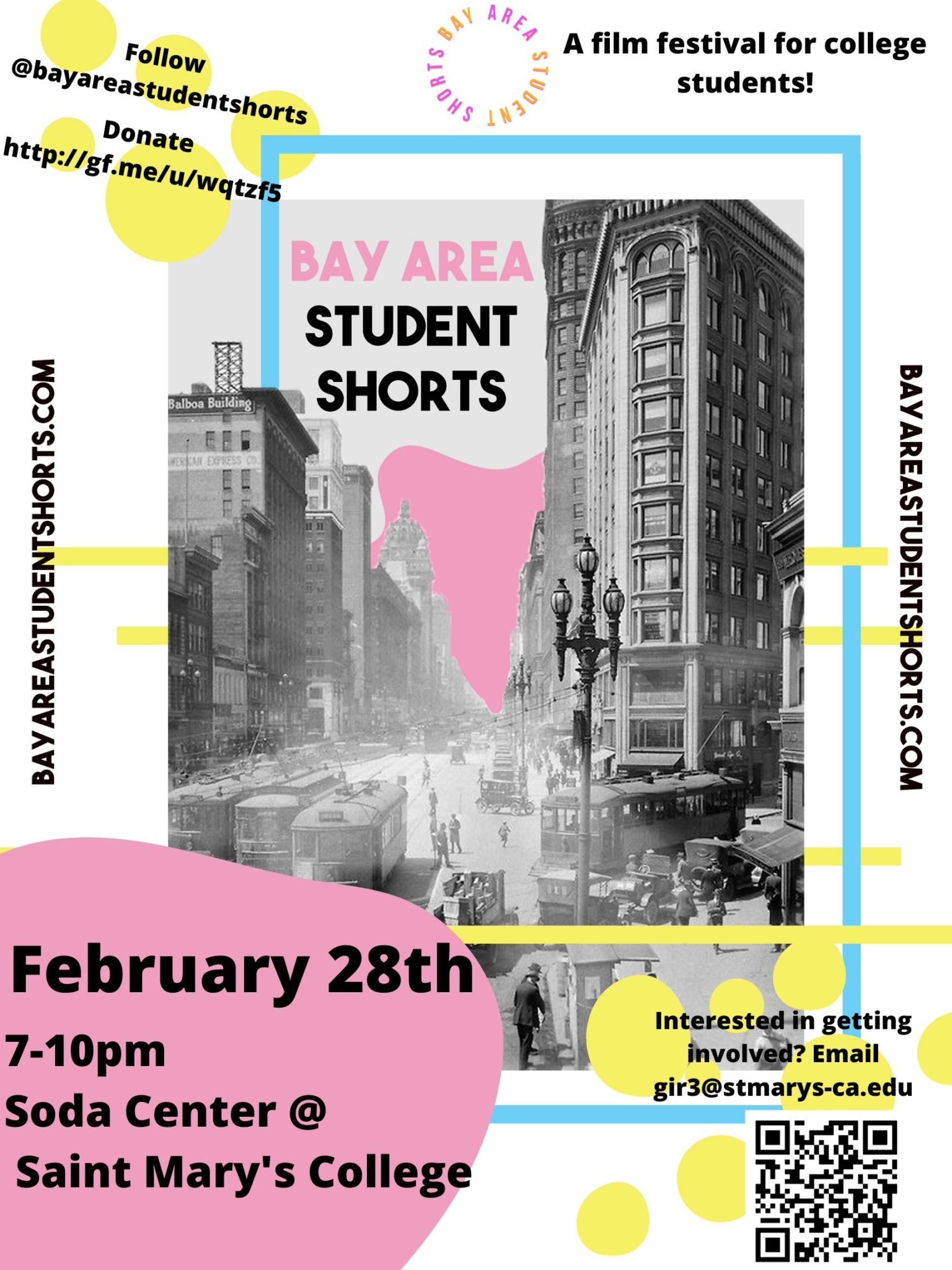 Bay Area Student Shorts is a free event that aims to support and connect aspiring filmmakers in the local community, as well as to

Bay Area Student Shorts is a free event that aims to support and connect aspiring filmmakers in the local community, as well as to encourage interest in the art of film. More information regarding the event can be found at bayareastudentshorts.com.